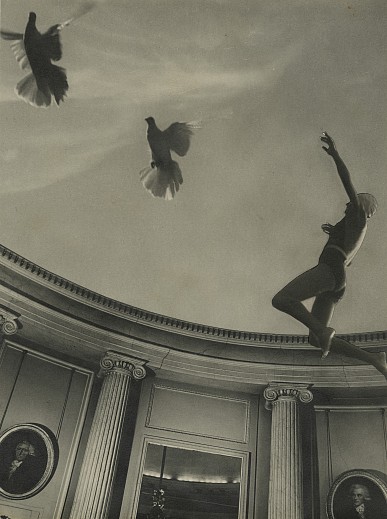 Pierre Jahan is a mid 20th century European photography name that many of us might recognize, but is generally less well known and appreciated here in the United States. The French photographer largely made his mark in the years surrounding World War II with images that oscillated between streetwise documentation and reportage and more overt Surrealism and experimentation, but he also had a longer photographic career that extended to portraiture, nudes, advertising, and book covers. This show essentially provides a whirlwind sampler of Jahan’s output, both ticking off examples from his best known projects and giving us a flavor for his range.

Out in the streets, Jahan had an eye for found oddities and eeriness, with images of peeling posters and mannequins capturing the uncertain anxiety of the times. A series of contact sheets taken at the Louvre are more crisply documentary, noting the careful packing up of artistic treasures like the Mona Lisa and the Winged Victory of Samothrace (in 1939), and then their return and reinstallation (in 1945), reinforcing a national sense of meticulous care and attention for cultural heritage, and bookending the war years. And Jahan’s images of the liberation sit aesthetically somewhere in between, capturing a frightened worm’s eye view of crouching pedestrians as well as turning a fallen column and crushed car into an elegant top down abstraction.

Some of Jahan’s most durably memorable images were made in 1941, of sculptures that had been taken down from public spaces and were slated to be melted down for their metals for the war effort. Jahan apparently snuck into a warehouse where the sculptures were being housed, and made his unsettling pictures. As seen in a handful of prints here, decapitated bodies, severed torsos, screaming faces, and even some writhing alligators are tossed into jumbled piles, the resulting pictures like some vision of the pains of Hell. The photographs were ultimately paired with poems by Jean Cocteau, becoming one of the key photobooks of the war period.

Surrealism seems to have been a consistent undercurrent to Jahan’s vantage point, and many of the images here push further toward the visualization of unconscious impulses and fears. While a doll’s head hanging by its hair from a nail and a violin sliced in half fit into well worn Surrealist tropes, some of Jahan’s collaged works are more expressively inventive, with flying bodies transformed into birds and an x-ray syringe intertwined with a handgun for effect. Jahan’s later work in the commercial arena also employed these kinds of techniques, in a detective novel cover with radiating target-like circles and a pharmaceutical ad with a transparent glass figure. He also re-imagined sculptural stone faces and bodies, exaggerating their drama or introducing them into street scenes like strangely lithe passersby.

It seems likely that in our current times of puzzlingly malleable truth and simmering anxiety that the Surrealist impulses of the past will have a resurgence, and that photographers like Jahan might be primed for rediscovery or at least renewed interest. This tightly edited survey reminds us of his breadth of vision, the consistent quality of his efforts, and the power of an off-kilter view of unsettled normalcy.