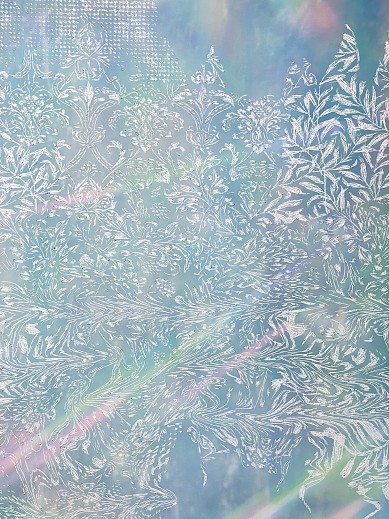 There’s a certain quality of light that refracts from a pool of water on a warm summer afternoon. With each ripple, a sunbeam dissolves into a universe of radiant sparkle; the effect can be intoxicating. Christopher Russell has leveraged this phenomenon as a window into the sublime. Each picture acts as a kind of mason jar — captured and sealed tight within the frame is something wild and untamed: sun-kissed beams of light, rendered in luminous hues of cyan and magenta, cascading across waves of wind-swept water.

Upon closer inspection, the surface of each print has been meticulously spliced with a razor’s edge into mesmerizing patterns and ghostly apparitions — the result, moiré effect that tricks the eye into a sense of motion. By the time your brain has perceived this sleight, the pattern has already transformed itself into a floral arrangement reminiscent of Victorian arts and crafts; a cushioned return to reality from an art induced daydream. The works are notably spared the weight of individual titles, identifying each with only a numerical value — The Spangle Maker 2, 3, 5, 10, 12 — as if alluding to the abundant, yet ephemeral qualities of light.

Russell has previously described the process of etching into his prints as a kind of “death by a 1,000 cuts.” This martyrdom proves to be an essential transaction to unlocking the psychosomatic properties of photography and its uncanny ability to provoke memory and sentiment. With each cut, Russell edges his pictures to the limits of the medium and firmly into a place of elegantly crafted contradictions — suspended somewhere between photography and intaglio, representation and abstraction, corporeal and ethereal.