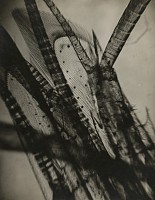 Eli Lotar (1905-1969) was a Romanian photographer and cinematographer. He was part of the Surrealist circle that included Germaine Krull, whom he assisted. Lotar published his photographs in reviews such as Jazz, Variétés, Bifur, and Documents. He photographed the Parisian La Villette’s slaughterhouses, which was some of his best-known work. Lotar worked as a cameraman for several well-known filmmakers, including Luis Buñuel and Jean Painlevé. Painlevé, a biologist and experimental filmmaker, was greatly admired by the Surrealists, who often extracted images from his films.