Showing Us the Light

For Khalik Allah, photography is a spiritual endeavor, a conscious marriage of street and self, a quest to elevate both. It is also inherently lyrical, and like a preacher improvising a sermon, a musician in the zone, or poet freestyling off the dome, there’s something mystical and transcendent in the execution. That’s not to say it isn’t firmly grounded in this reality, in the actuality of life at 125th and Lexington in Harlem where much of his work is focused. Cycles of addiction, poverty, and suffering haunt the darkness of this nightscape but the camera is an instrument beholden to the light.

online version of the article

The Camera Ministry of KHALIK ALLAH

"I think that beauty is everywhere. It depends on the decision to find it, focus on it, and accept it. Perception is always a choice. It seems that we are feeding off what our senses tell us is reality, but we choose what we see. When we look outward, we see a reflection of what we first witness inside ourselves. When you turn inward, your inner world is naturally unique. As long as I draw on that well of inspiration it’s not going to run dry."

The documentary filmmaker Khalik Allah, whose new feature, “Black Mother,” opens on Friday, is one of the most original cinematographers of the time. The modern cinema is a photographic cinema, with its roots in the hands-on creation of personal and highly inflected images; Allah is also a notable still photographer, and he made “Black Mother” the same way that he makes stills. He filmed the movie alone in the company of his subjects, doing his own camera work (in a variety of film and video formats, in color and in black-and-white); for that matter, he also recorded the sound. But his photographic sensibility is only one element of his exemplary art. He also edited the film, and his complex sense of audiovisual composition—textural, tonal, thematic, rhythmic, philosophical—is as original and as personal as his cinematography.

Link to the rest of Richard Brody's review from March 8 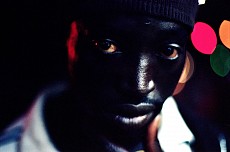 HOW KHALIK ALLAH BENT THE RULES OF STREET PHOTOGRAPHY, AND FOUND HIS VISION

The durable power in Allah’s portraits lies in his unflinching willingness to connect, to take the risk of engaging with someone who may at first be rightfully fearful or defensive.

The street corner of Lexington and 125th Street in Harlem is worlds away from the skyscrapers of Midtown East and the Gitterman Gallery, where work by the filmmaker and photographer Khalik Allah is on view through May 12.

10 Galleries to Visit Now on the Upper East Side

The Upper East Side — the area called “above East 50th Street” on gallery apps like See Saw and Artforum — is thriving...

The Art Deco Fuller Building at 41 East 57th Street has historically been an art gallery hive. One of its tenants is Gitterman, a gallery devoted to photography and now showing the work of Khalik Allah, a young filmmaker and photographer. (Mr. Allah’s most recent film, “Black Mother,” was shown at this year’s edition of New Directors/New Films.) The photographs here were shot in Harlem, at 125th Street and Lenox Avenue, an area that was also the subject of his 2015 film, “Field Niggas.” Together, they are like a sheet of drawings by an old master, a study in facial expressions that suggests a range of experiences, from the ecstatic to the infernal.

In just two films, he has developed and honed his incomparable style, providing the festival, and the documentary form itself, with one of the most memorable, intense experiences in recent memory.

BLACK MOTHER selected as one of
11 Movies You Need to Know at New Directors/New Films by A.O. Scott

Gliding from color to black and white, from digital to analog, from grim realism to spiritual ecstasy, the film offers a song of praise to the island of Jamaica and a reckoning with its painful history and hard-pressed present. Mr. Allah gathers a rich blend of voices, faces and natural wonders, a kaleidoscope in which shards of violence and poverty commingle with glimmers of dignity and resilience.

Khalik Allah takes to the streets of New York City, capturing the nocturnal locals of Harlem in a series of bold and beautiful images.

In the summer of 1998, Khalik Allah had come to a major crossroad after failing eighth grade. Dancing with a B-boy crew had been keeping him out late at night, and school had failed to interest him. Yet he understood the importance of educating himself. Concerned about his future, he headed up to Harlem and began to study with the Five-Percent Nation at the Allah School.