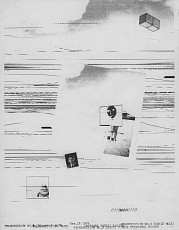 It is with great sadness we announce the passing of William Larson.

I only met Will in 2014. By then he was already diagnosed with Parkinson's disease. He warned me that there might be times during our conversations when he would be silent and not respond. He didn't want me to worry if I said something wrong and explained, that among other effects of the disease, it sometimes prohibited him from speaking when he wanted to. I share this because Will was very interested in communicating conceptual ideas. His work explores ideas of perception and representation. He was highly aware of many existing dialogues in the history of art and consciously added to them. I know, if I had met him earlier, our conversations would have lasted for hours. I wish I had more time to learn from him. I will miss him deeply.

Our exhibition of his Fireflies series in 2015 remains a highlight in my career. This series were some of the earliest digitally generated works of art. Larson utilized a technology new to the time, a Graphic Sciences DEX 1 Teleprinter, a sophisticated early fax machine, to present a dynamic way of image making that extended the vocabulary of montage. Larson conducted the technology to produce an almost random juxtaposition of dissimilar images. The symbolic, or poetic, potential of the juxtaposition references "the imperfect operations of memory or dreams."

With Fireflies, Larson sought to move beyond the traditional notion of what a photograph can be. He was interested in representing the fluidity of time with a static work of art. He stated: “I started to work and think of photography as a system of production, supporting a bias toward the additive possibilities of the medium, and less the subtractive, descriptive, or literal.”

Larson grew up in western New York and attended the State University of New York at Buffalo. He received his Master’s Degree in 1968 from the Institute of Design, where he studied with Wynn Bullock and Aaron Siskind. Soon after receiving his Master’s degree, he established the photography program at Tyler School of Art, Temple University, where he taught for over 20 years. He was director of graduate photography and digital imaging at Maryland Institute College of Art for 18 years. Larson’s work has been collected and exhibited by numerous institutions around the world, including the Museum of Modern Art, the Metropolitan Museum of Art, the J. Paul Getty Museum, the Carnegie Museum of Art, The Morgan Library and the San Francisco Museum of Art.