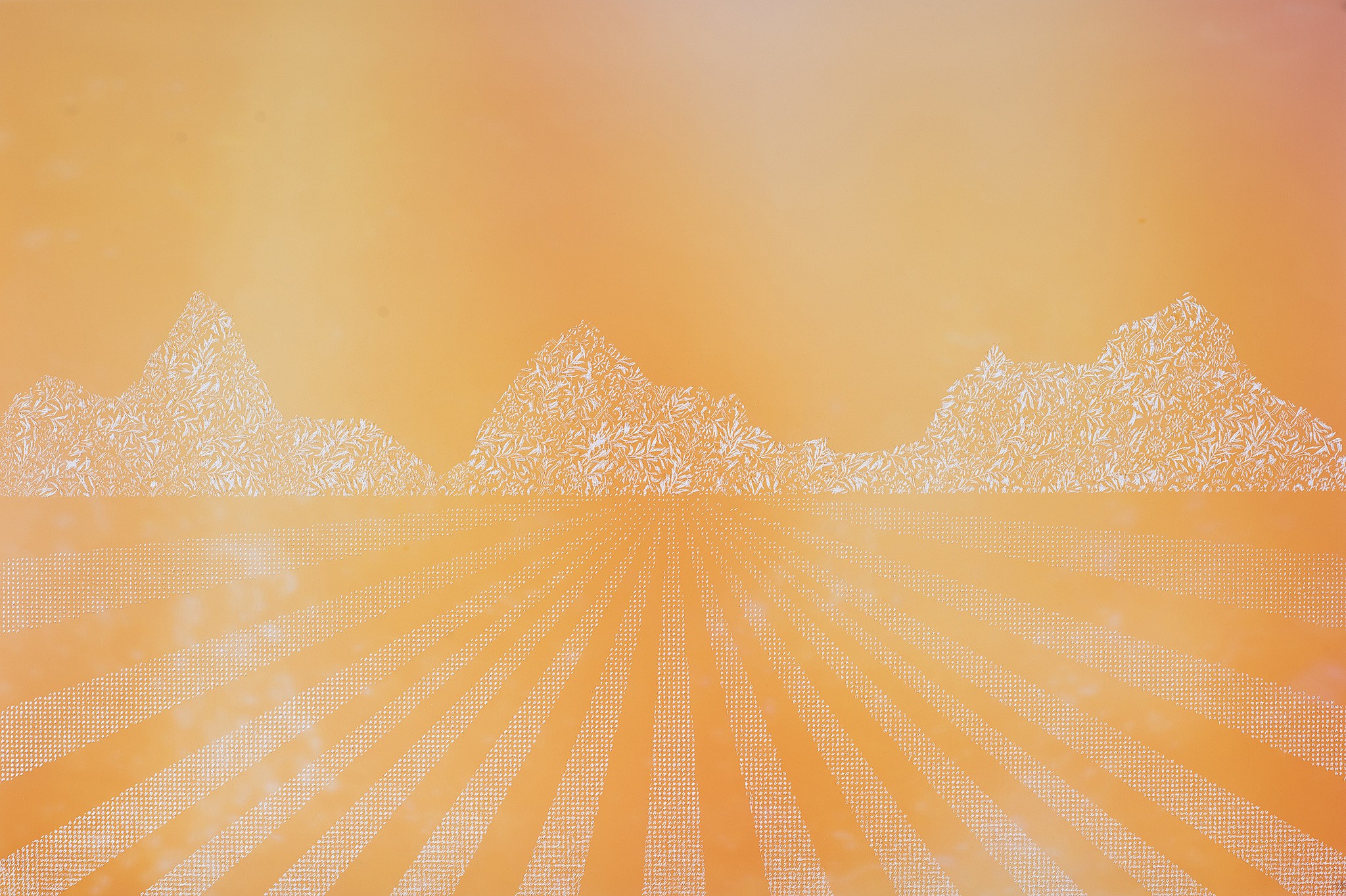 Gitterman Gallery is proud to present an exhibition of contemporary work by Christopher Russell. The exhibition opens on Wednesday, February 6th from 6–8 p.m. and continues through Saturday, March 23rd.

This exhibition is Christopher Russell’s first at the gallery and the beginning of his representation by Gitterman Gallery. It will include a selection of work from Russell’s “Mountains” series (2016-2017) and as well as works from his more recent series, “The Explorers.” Each piece is unique and combines color photography and drawing. Based in the Pacific Northwest, Russell has long been taken with the majesty of Carleton Watkins who photographed that area and others 150 years ago. Russell photographs in some of the same land but from the opposite end of the history of photography. He makes fuzzy or hazy color photographs by limiting the functionality of the lens. The resulting abstract images form the foundation for his own imaginary vistas. He then manipulates the resulting prints, scratching into the emulsion, and sometimes painting over the scratches, creating an artwork that is at once a photograph, a drawing, a painting and a bas-relief.

Russell’s work challenges the traditional conception of photography as producer of evidence, and provokes reflection on our understanding of nature and the landscape. He uses historical plant and floral patterns from the Arts and Crafts era of the late 19th to the early 20th Century as source material for his drawing, and alludes to the concept of the infinite within nature. Though he pushes conceptual and art historical boundaries, Russell remains a Romantic and his artwork is a way for the viewer to experience the wonder that he has found, and that continues to inspire him.

Christopher Russell was born in Sacramento in 1974 and received a BFA from The California College of Arts and Crafts and an MFA from the Art Center College of Design. He has had a solo exhibition at the Hammer Museum in Los Angeles and his work has been featured in group exhibitions at The J. Paul Getty Museum, Los Angeles County Museum of Art, Norton Museum of Art, Berkeley Art Museum, Armory Center for the Arts, White Columns, Tokyo Institute of Photography, and De Appel Arts Center, The Netherlands, among others. Russell also produces his own unique books in addition to his 'zine Bedwetter. His first novel is Sniper, and other books include Budget Decadence (2nd Cannons Publications), Pattern Book (Insert Blanc Press) and Landscape (Kolapsomal Press) which was included in Phaidon's The Photobook: A History Vol 3 edited by Martin Parr. His work is included in numerous museum collections including the Brooklyn Museum, The J. Paul Getty Museum, Museum of Contemporary Art, Antwerp, Museum of Contemporary Art, Los Angeles, Museum of Contemporary Art, San Diego, Los Angeles County Museum, Rhode Island School of Design Museum, Hammer Museum, Museum of Fine Arts, Houston, and the Tokyo Metropolitan Museum of Photography.