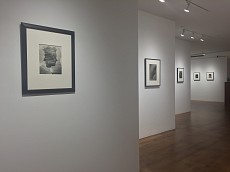 GITTERMAN GALLERY included in TRAVELMAG's Best Galleries on the Upper East Side.Gitterman’s well-curated photographic exhibits capture realism as much as they obscure it. The thought-provoking show “Hommage à Christian Bouqueret” was a collection of the late historian, curator and collector’s vintage photographs. One particular highlight was an untitled gelatin silver print by Roger Parry that depicted, with vivid color, the dejected beauty of a young woman. Another by François Kollar superimposed images to show how two souls can occupy one body. This sense of warring duality permeated the entire exhibit.