By Richard B. Woodward

Over the last 5 years, Klea McKenna has repeatedly proven herself to be a contemporary master of the photogram. A technical innovator who has nonetheless remained true to this primal act of the medium—writing on pieces of paper with light—she has created ravishing prints that incorporate nature into the process of their emanation, an artistic philosophy that reflects an unconventional upbringing in northern California.

DIRECTIONS: If coming by subway, take the G train to the Clinton-Washington station and use the Washington Avenue exit. Walk up Washington Avenue one block to Dekalb Avenue and take a right one block to Hall Street. Enter the campus at the corner of Dekalb Avenue and Hall Street. Walk through campus to the ARC building at the end. It is a two story building with many triangular roofs.
link to more directions      link to campus map

Her work, as she sees it, though aesthetically gorgeous, sensual and mysterious, is dependent on the idea that these things, the sinewy, ghostly photograms-a physical and yet metaphysical expression of these textiles-have something to say for themselves. “They’re not just dead matter.”

Gitterman Gallery is proud to present an exhibition of contemporary work by Klea McKenna. The exhibition opens on Wednesday, September 12th from 6–8 p.m. and continues through Saturday, November 10th.

This exhibition marks her first solo show in New York and the beginning of her representation by Gitterman Gallery. It is presented in association with Von Lintel Gallery in Los Angeles where McKenna will have a concurrent exhibition from September 7th through October 20th.

The exhibition presents McKenna's most recent work Generation alongside work from two of her previous series Automatic Earth and Web Studies. With each series, McKenna uses the photogram process innovatively to create unique gelatin silver prints that contain both vivid detail and ethereal abstraction. She pays homage to her subject's histories while re-animating them through her engagement, revealing nuance, depth and energy.

We are proud to announce the representation of KLEA McKENNA

JOSEPH SZABO in THE NEW YORKER

An avid chronicler of American youth, Szabo began taking pictures at Jones Beach in 1960, and returned year after year to capture the diverse human menagerie that gathers every summer: the evolving styles of swimsuits, the near-naked bodies in their limitless variety, the jubilance and intimacy of a day at the beach. Floating above it all, in Szabo’s scenes, is the figure of the lifeguard, on a high perch, upright and vigilant amid the languid bodies and umbrellas below. Sometimes they are a taken-for-granted part of the landscape, their chairs blending into a wide-angle view of the crowd; sometimes they’re godlike, on a literal pedestal and shot from the ground.

‘Baywatch’ Gets Its Game Face On
By John Leland

Joseph Szabo photographed the lifeguards at Jones Beach for 25 years. He saw things that most of us never will.

The durable power in Allah’s portraits lies in his unflinching willingness to connect, to take the risk of engaging with someone who may at first be rightfully fearful or defensive. 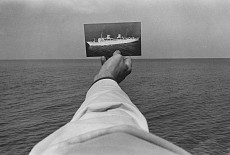